Dancing to the Tune of ‘Breaking Silence on Menstruation’ 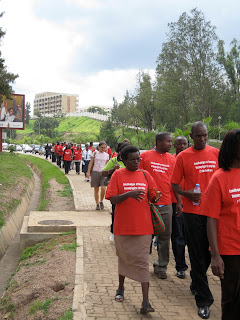 Hey if you thought women and men (including parliamentarians, Ministry permanent secretaries, school girls, Int’ NGOs staff) marching from one city centre to the another with the aim of ‘Breaking silence on Menstruation and advocating for abolition of taxes on Sanitary pads was up to no good, take a deep breath and read on:

-The Rwanda Government recently approved the 2011 budget, including a remarkable $35,000 towards the purchase of sanitary pads for the schools in the poorest districts around the country, not to mention that there is an ongoing exercise to construct separate latrines for both boys and girls.

-On the day of the march to present, over 10,000 packets of sanitary pads have been collected from community members (including Rwandan diaspora) to be distributed to rural school girls who lack them.

-The same group of women, men and girls who participated in the march, have organized a sanitary pad distribution exercise a few days from now where the collected sanitary pads will be distributed to schools that lack them most, in each region of the country. This will be coupled with health and hygiene sessions with the students and teachers and sharing best practices around menstrual health.

The Minister of Sports and Culture (who was the guest of honor at the march) has a famous saying in the local language ‘ibyiza Birimbere’ loosely translated as, ‘Greater things lie ahead.’ I totally agree with him.


Julian, SHE COO
No comments: