Today I was reminded of why I started SHE in late 2007. I headed off with Maria, our new Rwandan correspondent (introduction coming soon!), to talk with a group of young women about health and hygiene—their thoughts, questions, and answers. A shy beginning evolved into an engaging conversation revealing some of the common issues girls and women face around the world—for example, Angela reflects some of the curiosity that girls/women have about their bodies, the health and hygiene and the difficulties in getting that information sometimes. But also, Jessica shares some of the issues that are not experienced by all, but are still serious, urgent, and need to be addressed. Check it out:

A Page From George Bush??!

Half of girls in Rwanda say that they miss school when they are menstruating. They claim that the leading reason for this is that pads are too expensive. So why is there still an 18% Value Added Tax on pads?

Well, we have good news for you. The Rwandan Association for University Women have teamed up with SHE in their efforts to make sanitary pads more affordable to girls and women in Rwanda as they look into reducing the VAT on pads. Check out the news release in the latest Rwandan New Times article!

History in the Making. 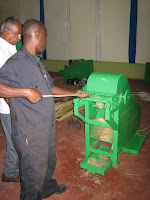 Banana fibre extraction machines arrived in Kigali and were assembled by technicians from India, accompanied by mechanics and engineers from Utextrwa (Rwanda fabric manufacturer who is involved in banana fibre project) and the Kigali Institute of Science and Technology. 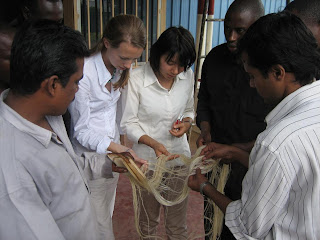 After months of waiting, the banana fibre extraction machines are ready for business and SHE continues to partner with the Rwandan government to be a part of the research and technology initiative to help develop the new industry in Rwanda. Everyone gathered around in excitement to watch the first stem being shredded into long fibres to celebrate the important technology transfer and the birth of a new potential manufacturing tool.

Not All Checks Are Created Equal

I invite you, oh SHE samurais, to come and try on a SHE shoe….you’re traveling on Bolt Buses (glorified Greyhound with wifi) to Boston and back, becoming the 21st passenger in the Matatus (African buses that seat 15) to reach home, helping yourself to networking event appetizer that is your dinner, enjoying Pabst instead of Pinot Noir. You are arguably like every other start-up venture full of passion but carrying a slim wallet. So if someone just wrote you a check for $3.1 Million for the next five years, you’d pop open the Perrier and rev up the Rover, right?

In the book of Elizabeth Scharpf likes and dislikes, signed checks are usually right up there next to orders of cilantro garnished guacamole that are “mistakenly” delivered to your table. So what is there to contemplate? Checks, or investments, are not created equal and good entrepreneurs must gauge the activities and outputs that are required of checks as they may take your strategic plan astray. How would the culture of your venture change? How would the prioritization of activities and constituents served change? And I invite you to share your tales of this very situation.

Does that mean I have to do the same with the guacamole? Nah, I’d just eat it.
3 comments:

Email ThisBlogThis!Share to TwitterShare to FacebookShare to Pinterest
Labels: Investments

A few months ago, Dambisa Moyo came out with a book called Dead Aid in which the author argued that aid was not only failing to help African countries, but actually debilitating their ability to organically grow. This news feed was remarkable on a number of fronts:
-the author is an African economist who is analyzing Africa;
-the author has worked in the private sector;
-the author is a woman.


She is the antithesis of almost all dominant voices theorizing on what is going to turn developing countries (especially in Africa) around—that is, foreign, academic, and male. Now, I’m not out to make enemies, but I think the public debate is clearly ready to be complemented with a voice that has relevant information given the time she spent in Africa, given her work with the actor that may be the economic growth engine (private sector), and given her insight into the best ROI vehicle (women). But then again, isn’t this just another opinion added to the mix? Maybe, but maybe this time she’s calling it right. To be continued this summer when I hopefully talk with Dambisa herself.
No comments: