As the Strategic Partnerships and Marketing Director, I am involved in executing several BHAGs – big hairy audacious goals, that is! One of my BHAGs is developing a kick-ass brand of our maxi-pad for SHE Rwanda along with my colleagues Julian and Gerardine.

Our first tool of our new brand identity will be our packaging. We are working with Kool Girl Posse on our brand logo and identity and they came up three concepts for us to test with girls and women.

I traveled to Rwanda in April and May to present these concepts to my colleagues and then to several groups of girls and women from rural and urban communities.

The concepts and designs also sparked a spirited debate among the SHE team! Likewise, girls and young women responses were also overwhelmingly astute and positive. It was surprising to learn which design elements particularly resonated with girls and how they perceived our product.


One lesson that I learned from the girls - don't be afraid to be bold in color! All you have to do is look around you to discover bright colors are everywhere! 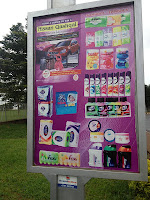 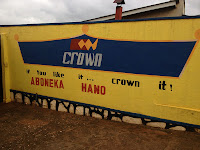 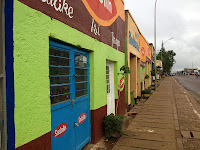 Our updated concept will aim to achieve better clarity about the product and its benefits, while also simplifying the information needed for healthy menstrual hygiene. The most important thing we learned from the girls and women is that our brand must speak to the girls’ desire to live life normally – girls need assurance that menstruation should not break the rhythm of their day to day lives.

Stay tuned to see how we continue to develop our new brand identity for our maxi-pad and better yet, for the debut of our brand and packaging!
No comments:

If we can dispense milk in Kigali, why not pads?


Milk dispensers have finally arrived in Kigali and people are enjoying fresh milk at an affordable price. For a coin of 100rwf (15 US cents), you can quench your thirst and carry on with your activities with a smile on your face if you like milk as I do.

My colleague and I were returning back to the office after a ride on a sunny day in Kigali, when our attention was pulled to a queue of motorcyclists standing  before a milk dispenser. They were so many of them throwing one coin one after another for fresh milk that we couldn't help to see that wonder. Indeed it was a wonder! We even served ourselves to a glass of milk!

This gave me an idea - how can we bring a pad dispenser to Kigali?

With just a coin of 100 RWF, you can be fresh and dry while menstruating when you need it!

We have been breaking silence around menstruation, we opened discussions between girls and boys on menstruation, and we are about to launch affordable sanitary pads!

Imagine our delight when Gloria Steinem, feminist, journalist, activist, and author of the famous humor article, "If Men Could Menstruate," signed our SHE LaunchPad at Society for Menstrual Cycle Research 2013 Conference. SHE was invited to participate in the conference as a panelist. On opening night of the conference, Gloria Steinem received the Making Menstruation Matter Award.

With our SHE LaunchPad making the rounds, who do you think should sign it next? Let us know in the comments section!

Belly Dancing and Maxi-Pads Slipper... It's a SHE Soiree!

Thanks to SHE trailblazer and supporter Sara Holdridge, SHE received over $2000 towards our SHE28 campaign in April! Over 50 women from southeast Connecticut came out to Sara's SHE28 FUNdraiser, where they were watched the SHE28 campaign video, received a free belly dance lesson from a teacher who donated her time once she heard of SHE28, and played a "Match that Quote" game using quotes said by notable women. The winner of the game received a pair of slippers created with maxi pads! Guests also donated menstrual products that were donated to a local social service organization. 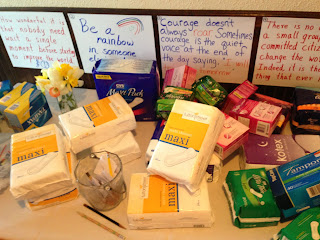 Sara writes that "[t]he event ended with a closing circle of all the guests, each of whome were now appreciative of becoming aware of this issue.  We did a choral reading of Jane Conner’s sentiment: 'The women joined hands and danced in a circle and the love and energy of their friendship rose up into the heavens and formed the moon so that even on the darkest night no woman is meant to walk alone.'"

Many people thanked me for hosting this event. My daughters and I were proud and happy to sponsor SHE28."

SHE28 Soirees hosted by our supporters truly help to sustain SHE's menstrual hygiene revolution across the world! If you'd like to host a SHE28 Soiree, please email us at supportshe@sheinnovates.com with "SHE28 Soiree" as the subject!