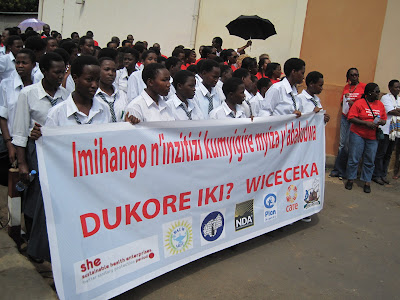 This is the first time I have not wanted to board the plane. For the last 1.5 years I’ve had one foot in Kigali, one foot in NYC, and one foot cruising on the BoltBus to my next destination. (OK, that would make me some sort of kangaroo species perhaps, but you get it. ) I usually come to Rwanda for a specific reason like finalizing business skill training, or bringing a new staff member on board. My arrival date is usually planned in advance and my departure date is set and not moved. I don’t really think about being 100% in Rwanda because we have fantastic local leadership and a significant amount of R&D still takes place in the U.S. This transience makes it difficult to be a part of a community in Rwanda--even in NYC too. It’s tough. And maybe part of me keeps it that way because it would then be difficult to leave….which is exactly how I’m feeling today.

On Friday, we, along with 10 leading grassroots groups in Rwanda, kicked off a national campaign. Hundreds of Rwandans gathered and marched across the capital and ended up in the small stadium to discuss obstacles to girls’ schooling, namely those related to menstruation. Can you imagine that? In a country where there was a genocide just 16 years ago that demolished lives. In a country where Human Rights Watch alludes to an “authoritarian govt” and lack of free press.


This was moving, kind of ridiculous (a Period Parade, waaa?), and productive. Is that even possible all at once? Most importantly, it demonstrated the strength of community, a community marching and acting to improve peoples' lives. And as the day went by, I saw so many faces of people I had met over the past 2 years from Angelina to Dinah to Shirley. These are people who make up such a rich community that I am privileged to be a part of....even with my three legs! 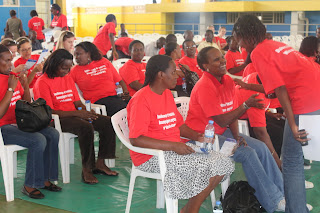 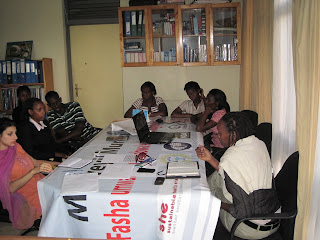 Hey folks, put on your walking/marching shoes and beat your drums to the tunes of ‘Breaking Silence on Menstruation’ campaign, which kicks off with a march in Kigali.

One thing I just realized for sure is, just as we all need management and bookkeeping skill, every one needs advocacy and awareness skills. Right now as I write this, my B.day is 15 minutes away, and I can’t think of anything to do, other than work on the campaign, one of my campaign partners mentioned she cannot concentrate on a thing, until launch of campaign is done, no wonder this is full time job for some, for those of you who have the skills, am glad to hear from you.

So we are holding the biggest campaign on ‘Menstrual problems’ ever and we hope to get the ‘Big SHOTS’ committing to action.

As soon as I am done with the launch of the campaign, I get to meet Fatima's favourite people: the Community Health Workers (CHWs) again to get stronger commitments from them on ‘Health and Hygiene Education’. Oh by the way, remember the interns aboard SHE? Today they distributed over 50 campaign invitations around town, what better support could I ask for? I promised to take them out when the whole exercise is done, on ME. 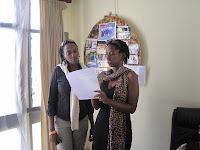 Hey I gotta go pick a piece of cake (its my Bday remember?),


In case you are unable to attend the march, watch this space, but if you are able, ENTRANCE FEE is :PACKET OF SANITARY PADS.(Includes a bottle of water and Tshirt).

SHE’s not just about pads. SHE’s about sparking conversations with girls and women about their periods, their bodies and their health. We had the pleasure of having one such conversation this past Saturday in a small village boarding school in Rwanda.

Early in the morning, Elizabeth and I met Justin and Dorothy, two of SHE’s interns (see picture), at the bus station in Kigali (it was so early that Bourbon Coffee did not yet have their ice for the day so we tried their hot coffee…divine!) We headed off to Nyamagabe, a district in the southwest of Rwanda, passing thru Butare, the major university town in Rwanda. From Nyamagabe we traveled another 30 minutes by mini-bus to a village called Tare where the menstruation management training session was being held. 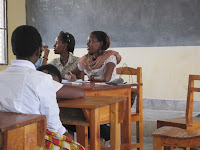 We jumped off the crowded mini-bus and met the community health worker. Accompanied by a throng of small children (we learned several useful phrases from Justin to keep the little ones at bay), we strolled over to Tare’s boarding school, a secondary school for boys and girls from all over Rwanda sitting atop a hill overlooking gorgeous lush green valleys. Several students were playing volleyball when we arrived. It was, in a word, idyllic.

We were greeted at the school gate by a very handsome, very friendly young man who we learned was the school’s disciplinarian (talk about perverse incentives!). Within a few minutes, 70 or 80 students, both teenage boys and girls were packed three to a row into a classroom with a blackboard and wooden benches (reminiscent of the schoolroom in Little House on the Prairie). The previous day’s lesson (in French) was still on the blackboard. Apropos our visit, the students had been learning about the
ovulation cycle!

As soon as the discussion began (and reference was made to menstruation), all of the boys streamed out of the room (which was fine, since it allowed the conversation to flow better – pun intended!). The community health worker and SHE’s interns led the discussion (in Kinyarwandan-which I have picked up in my 2 weeks here, just kidding, the interns were taking notes in English and a lot could be gleaned from observation).

The students had a lot of questions – about irregular periods, about condoms, and about getting cheaper pads (most of the students currently use rags). Two students gave a lively demonstration on how to use a sanitary napkin (see photo). Justin, Dorothy and the community health worker answered the questions they could on the spot and the rest were collected for follow up. 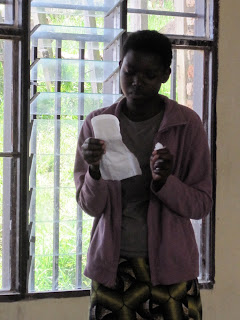 Although I did not catch every word, the take away was that the girl students were bursting to talk about their periods, their health and how to protect themselves. Next steps are to provide feedback to Fatima, the training guru, on how to fine tune the menstruation curriculum and training approaches to address the questions and concerns we heard at Tare.

Judy
Guest Blogger and SHE Legal Extraordinaire Adviser
No comments:

Who's in the SHE House? 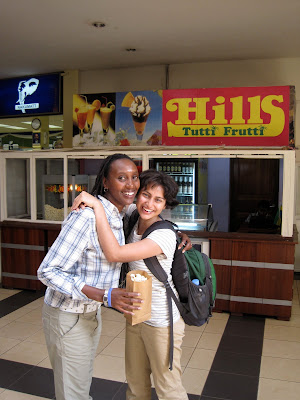 
Do you guys recall the arrival to Kigali (SHE hub) of a SHE M&E wizard? Fatima? So her 3 months stay came to an end last week, and I must say it was with great achievements, I became a better monitoring person, thanks to her. Is it always that monitoring and evaluation people develop so many documents/questionnaires? I am about to start calling them stalkers!!! I miss Fatima!

So, these days the SHE Chief Instigating Officer is really taking care of me by making sure am not ALONE. She trotted the world this time with our lawyer, who, apparently on a holiday, is busy looking at SHE MoUs (contracts), and giving me insights into becoming a lawyer, Welcome Judy. So we actually have another J in the house.

Most important though, is that right now, I have a number of volunteer interns involved in the Monitoring and Evaluation, very interesting kids, they are out there putting to use all the forms/questionnaires formulated by Fatima, and visiting the CHWs (community Health workers) training sesions while I am kept on my toes managing them (I am loving the SHE full house right now).

Next week is my bday (23rd), and I just got an early present.

Watch this space for : presentation to an group of philanthropists and my update on what happened on my B.day.

Email ThisBlogThis!Share to TwitterShare to FacebookShare to Pinterest
Labels: SHE House 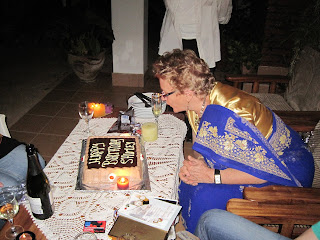 I’m here visiting Kigali with SHE founder Elizabeth Scharpf. We were lucky to arrive here just in time to celebrate International Women’s Day today, Monday, March 8. The day was declared a public holiday by the Rwandan government just this past Friday. As a result of the impromptu holiday, the city was quiet. We powered thru the day nonetheless with the help of exquisite delicious Rwandan coffee (and coca cola!). It seemed everyone was celebrating - two fellows sitting outside the Kigali tourism office happily informed us that the office was closed today on account of all of us lovely women!

And celebrate women we did! Perfectly timed to fall on International Women’s Day, today was also the 70th birthday of Professor Shirley Randell, Director of the Centre for Gender, Culture and Development Studies at the Kigali Institute of Education. Shirley is a pioneer in the space closest to SHE’s heart: using innovative techniques and leveraging international partnerships to ensure that girls and women get the education necessary to fulfill their potential. SHE wishes everyone a wonderful International Women’s Day and salutes Shirley, a great friend, inspiration and mentor!